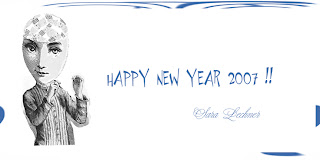 Do you know what LULU is?

I just bought this wonderful book:

Beeton's Book of Needlework with over 400 pages and all possible techniques -antique but actually new!- and it was a book download for only 1,79$!

I discovered LULU and it's amazing possibilities! I have this explanation about it from an article mentioned in Mary Bogdans site:


Lulu puts on a Canadian face


Just as he helped revolutionize the high-tech world, Bob Young is doing the same for book publishing. And now he's putting a Canadian face on it.

Young, who helped tilt the computer world toward the Linux operating system when he founded Red Hat Linux, is expanding Lulu.com, the "hassle-free" publishing venture he set up a couple of years ago. The venture has been so successful in the United States and elsewhere that he ha decided to start tailoring its image to individual countries.

And he has no idea how it to do it either. "No one knows," he told Globetechnology.com Friday, "but we'll find out."

Lulu turns the traditional notion of publishing on its ear. Unlike commercial publishers, Lulu does not invest a cent in an author; it just rakes in 20 per cent of the sale of any copy it sells. Writing the book, editing it, designing it and creating a cover are all left to the author, as is setting the price. And so is the marketing.
Print Edition - Section Front

Section A Front Enlarge Image
The Globe and Mail

Moreover, the author retains all copyright over the work.

And he's doing this not only with books, but also video, periodicals, multimedia, photo books, customized calendars and other projects.

The magic sauce in this idea, at least for the printed-word part of the business, comes from a technology that allows a single book to be printed and bound by a single expensive machine. Young has a contract with Xerox, which makes giant printers that can do all this in a "no-touch" process, in plants all around the world, and print individual or batch copies on demand. And the printer doesn't start to operate until a buyer's credit card has been approved for the sale.

"It's all done by software," he says.

The economics of print-on-demand make this a profitable concept; because no book is printed until it is sold, no books end up unsold and turned back into paper pulp, as unsold books often are.

Young worked out the formula while marketing his latest acquisition, the Hamilton Tiger-Cats. A native of Hamilton, Ont., and now living in Raleigh, N.C., Young realized that if you see both as content producers, football and book publishing are not so different. The company he created to market football, MRX, is now spending more time with Lulu.

"MRX," he says, "is now a marketing plan for digital content."

It was through that marketing that Young discovered there were different "patterns" to the kinds of books sold in different countries. France, for instance, has a high number of fashion books, while evangelical Christians dominate Lulu's business in the United States.

Localizing Lulu for Canada is basically taking the sting out seeing a line of books clearly intended for another audience. In the United States, for example, conservative Christians, with about 33 per cent of the population, form a far greater market for evangelical books than conservative Christians in Canada, who number between 3 and 7 per cent.

Young has no idea what will happen in Canada. "Well, I imagine we'll have more hockey books than the Americans," he says.

Then he ruminates about a book being published by a Swedish writer on Lulu, about how to cook a reindeer: "Perhaps that will be popular here too."

He calls it "authorgeddon," the publishing version of Armageddon. But it also means that there is a tremendous demand for a service such as Lulu.

When considering the prospects for writers using Lulu, it helps if one forgets fiction and poetry, which require specialized marketing. Think instead of something like software manuals, or books whose content must be updated regularly.

Rather than pulping thousands of software manuals, Lulu's print-on-demand concept allows buyers to download the latest version, which could have been updated to cover the latest features as recently as yesterday. The kind of changes required in the sciences are so rapid these days that they have far outstripped traditional publishing's ability to keep up with them without losing incredible amounts of money.

Now, Young says, it's all in the hands of the writer.

"We just provide the marketplace."
Posted by Sara lechner at 2:04 PM 6 comments:

One new UFO hit the road! 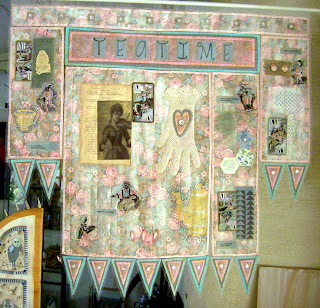 I'm really happy I finished this piece. I like it now. Sometimes you have to sleep enough over a piece till you have a good idea of how to continue the work... I slept 4 years on it! :-)

More Photos with details of the work in Flickr
Posted by Sara lechner at 11:56 AM 7 comments: 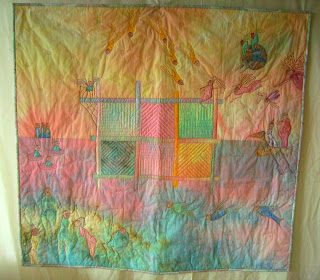 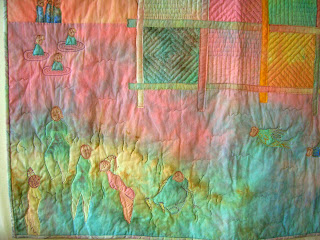 This was my first non-traditional piece.

She teached us how to use our imagination to create, using music, doing doodles, etc.

At the end i had this piece almost finished to take home with. I worked till late at night to finish it... I was so happy of finding all these small figures who never left me since.

The fabric were from Heide Stoll Weber because I din't have a clue about dyeing at that time!

After this workshop I travelled to the States and took classes at the QSDS, at Arrowmont, at Susan Shie and James Acord's Turtle Camp, at Haystack, I began twice a City and Guilds embroidery class
which i never finished because i was already teaching on my own... (i was always sorry about not finishing them!!!)

Now i told you some details about my development in textile art. I also had an art instruction before marrying but not in textiles. This developed after my children grew up!...

If you want to see more details of this quilt, please look into my flickr site!
Posted by Sara lechner at 4:24 PM 16 comments: 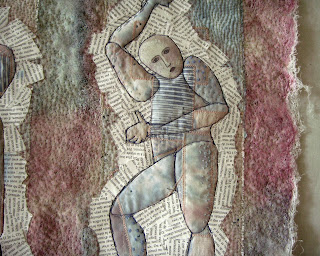 I found this piece, as i told before, in my UFOs stash. i want to finish all of them now before i begin with new pieces. this trains me after so many months of work on the studio... and it gives me the possibility of using new materials.

i wanted to add contrast between the figures and the background. paper was the final choice. i was working with paper in my collabs so that i used some on thie piece too.
i was happy with the result. i sewed some tulle over the paper to keep it in place and used this to protect my weaved embroidery too. 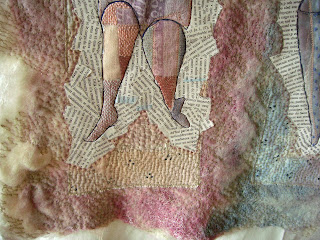 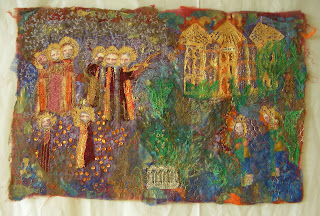 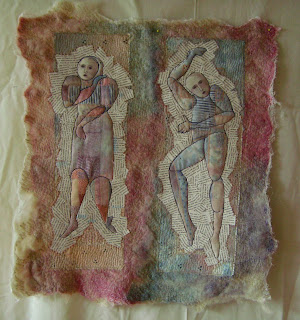 As everybody slept today morning i took photos and uploaded them. these are former works i found as i ordered the studio (i had to finish "ge to know me") and some other pieces i hadn't taken photos of. i want to document my work in my flickr album and i must take more pictures in the future...

Please look at all new photos in my flickr album (about 35!)
Posted by Sara lechner at 3:14 PM 1 comment: 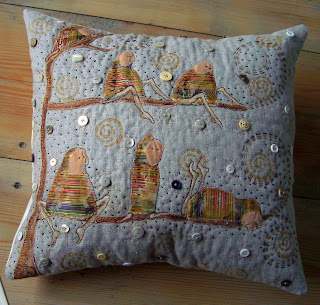 I finished the second pillow today. The little people are taking care of a part of my collection of vintage buttons. They look like snow flakes, perhaps because we are having the most hot fall in history and everybody wants to have some snow... for the holidays at least. no white christmas this year, i'm afraid!
Posted by Sara lechner at 3:53 PM 8 comments: 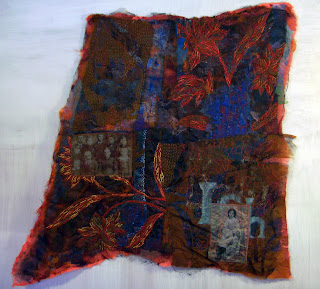 I found this piece made some years ago doing order in my studio. I always thought it was too dark and hadn't find a place for her to live... Now I like it very much, even if it has almost no contrasts. We change our taste along the years. This doesn't make the piece better -I should have used more contrast- but I accept the fact and like it in spite of this...
I did much handstitching on it accentuating some parts.
Posted by Sara lechner at 4:49 PM 5 comments:

Style confusion or To Be or Not To Be

Perhaps I should explain that I made all these pillows for classes I gave. Because of that they are made in so many different styles, as my whole textile work is as a matter of fact.

I'm always asked to give workshops for different kinds of public (here in Austria they are particularly traditional)and I must sew different kinds of projects. As I do this for a living I cannot always choose what I really want to do (this would put most workshop participants to rout!! LOL)

Sometimes I think it's deffinitely me when there are fewer colors and some funny figures... I can get real authenticity crisis sometimes....
Posted by Sara lechner at 7:26 PM 2 comments:

The pillows in my living room 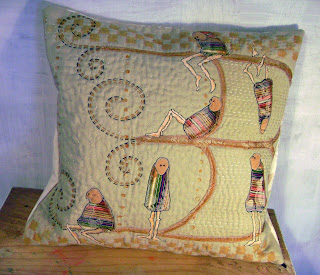 Today I was working on a new -old- pillow I found as I ordered my studio (you cannot imagine how many pieces I "found", most UFOs, I could spend a year finishing all them!). As I was stitching I thought I could take some pictures of all my pillows because I never had yet...

The pillow on the picture is the second one in a series of these little men, I finished it yesterday (and began it 9 years ago...). As soon as I finish the one I'm stitching I'll upload it too.

If you want to take a look at all the pillows please go to my flickr album.
Posted by Sara lechner at 6:51 PM 2 comments: 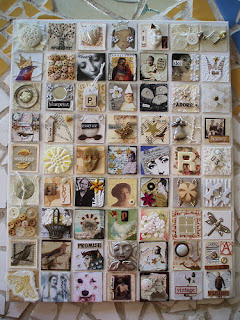 
I want to invite you to a new swap I organize. We already have 3 participants and need 4 more.

she already organized such a swap, you can see the picture above with the mounted squares.

If you are interested in doing this swap, please email me at

We don’t want to stress ourselves doing this, it ought to be just fun! But I would be very happy if you participate.

If you’d like to participate I’ll send you the detailed instructions (or I can send them too, if you want to see them before you decide!)

Please keep in mind that the first 4 participants who answer to this mail are going to be taken! 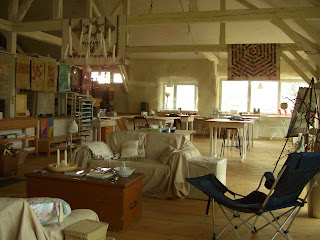 After 3 years of hard work we finished the studio/café/shop/exhibition room/storage straw bale project!!

You can imagine how happy I am! I am sorting all material now (this is a hard job too!) so that everything has a place and I can find it!!! After living 20 years in a 3 storey building and having the material scattered all over the place I'm in heaven now!!

Now everybody is invited to use this studio. I'm offering classes in summer 2007 and I have also the possibility to offer a place for an artist in residence. You can also come for a week or two, alone or with friends (I have 2 double rooms), and work on your projects (with or without supervision) and enjoy the wonderful landscape of the "Mostviertel".

Even if it doesn't look like it, I want to keep it simple and don't have too much of a show here... It must be a place to work, rest, get inspired and enjoy... I want to have the possibility to work more than giving one class after the other, but I enjoy having fellow artists around me doing their thing. I find having contact with other artists is good for winning new perspectives.