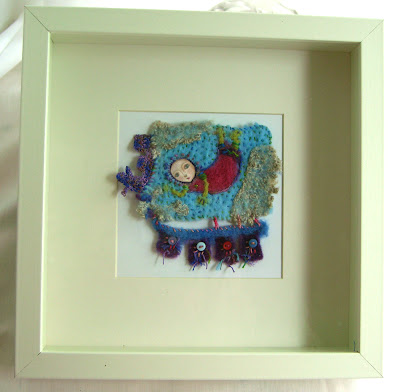 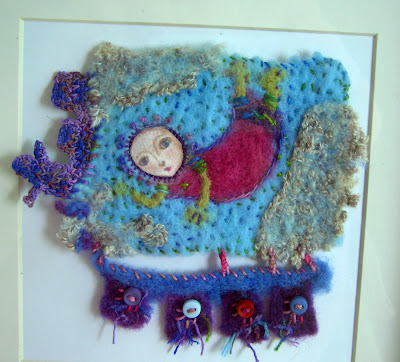 This is a sneak preview of my new series. The name of it is "Inkings" (using the name in two ways -one as the normal meaning of the word and the other one meaning its connection with the Inka art) I think I will keep it a secret for the next months because I have to show something new at the interviews and articles I'm writing for some well known magazines at the time and I'm sure you will see them at the due moment.

Basically I'm using different elements you find in the Inca textiles in a new way.

For instance the borders that are made from a very special technique by the Nazca artisans are made with crochet by me to give an idea of the way they end the borders.

I also used a kind of border with small birds on it at the bottom (the birds are the buttons).

I must say this work was the prototype and I already improved some features...

All has a deteriorated look like some originals that have been found have.

I found a very good book about these textiles. The name of it is "Early Nasca Needlework" from
Alan R. Sawyer and it is a wonderful one because it shows even how the technique I mean is made (very time consuming!). The price of the book is really high but it was worth every penny I spent!

You can also see the way I frame my work on the pictures. I get the frames at IKEA.
Posted by Sara lechner at 12:30 PM 14 comments:

I promised to show some pictures of the textile market at Haslach last weekend. 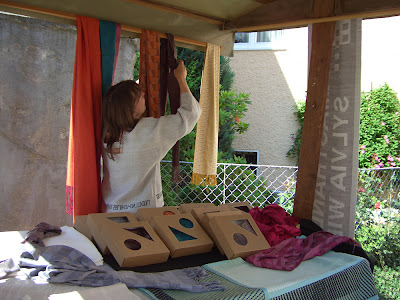 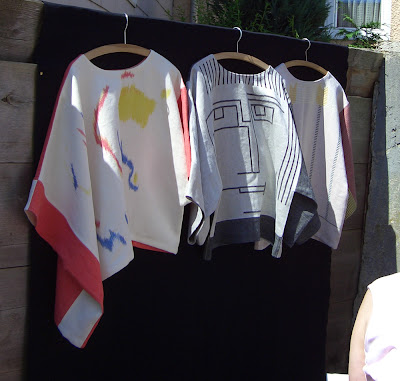 These guys were cool!: 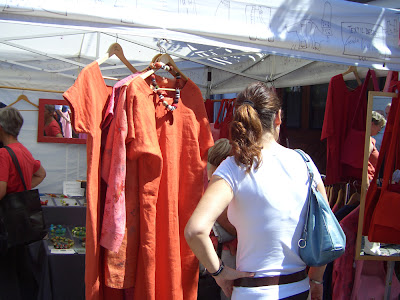 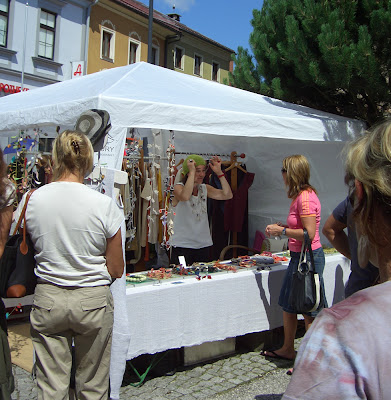 Old textile at the museum: 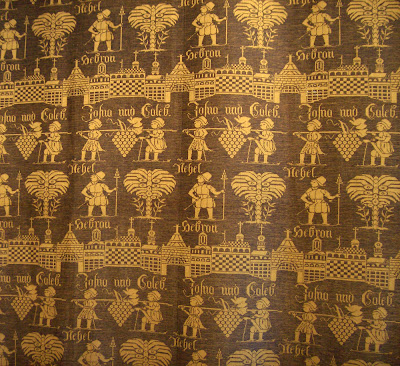 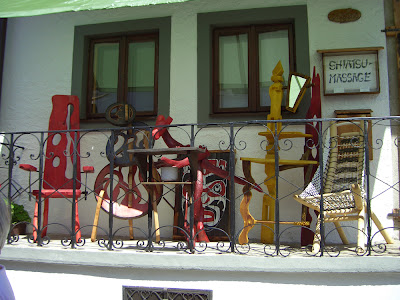 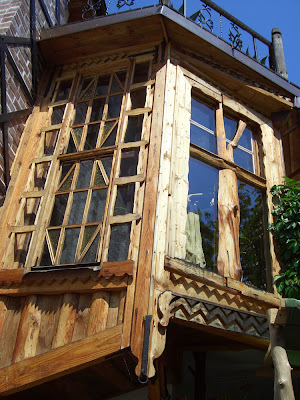 I liked this fence: 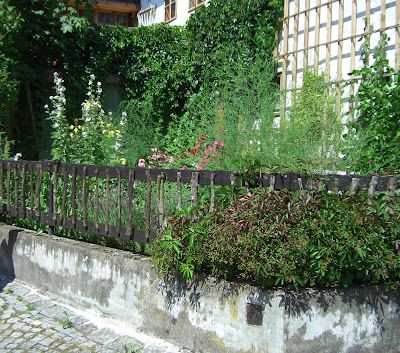 Here I bought some paper strings with leaves and feathers (perhaps you see them if you see the picture big enough!): 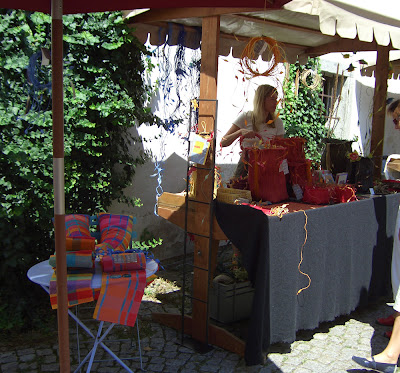 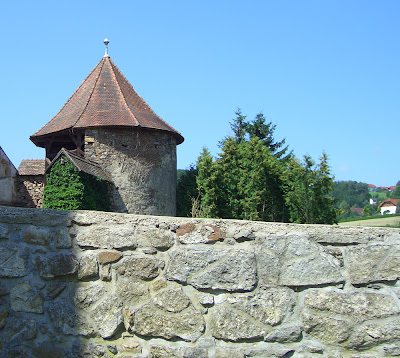 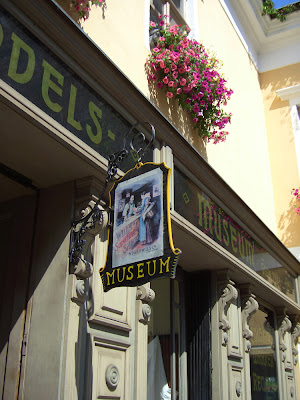 A turn in my themes

Some days ago I rediscovered one of my passions. Not only do I love the Middle Ages but I love the early American civilizations quite as much. I did begin to study anthropology as I was young hoping that I could do some archaeological excavations sometime in my life.

I already told about my childhood in a house full of Jesuit art of South America and about loving all the tiny details and small faces hanging from or appearing somewhere on the surface of an object.

On Saturday I went to the biggest textile event in Austria, the Textile Market of Haslach and bought a book about Textiles of Peru (from Paracas and the Nazcas) which has wonderful detail photographs of lots of textile pieces of this region.

This helped me to make two smal pieces of felt and hand embroidery that I'm going to show you as soon as I have good light to take photographs.

I just wanted you to know what you can expect in my future work.

I found some pictures at Go2Peru : 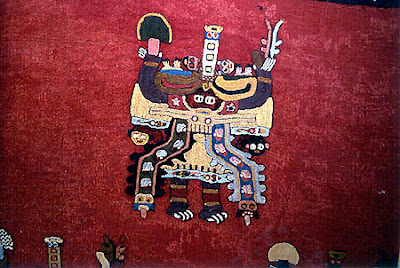 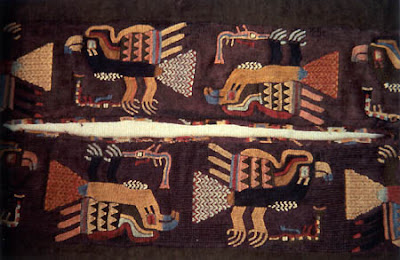 and perhaps you get an idea of where I'm heading to...
Posted by Sara lechner at 8:45 PM 3 comments:

As I told you, I was asked to do a chasuble for our parson and it must be a colorful one. He loves colors. I have to do the middle piece and the main color is going to be green.

I couldn't resist to put this photos in the blog... Just to show the colors I am using, the silks and the golds...

I also put a picture of one of the different backgrounds I'm sewing.

I worked on them with the embellisher and I'm doing machine stitching over nylon hankies on top of the silks. I hope he's not going to get too near the candles of the First Communion children... I couldn't think of another technique to subdue the silks and gold fabrics. These disintegrate in my hands. I just didn't want to use traditional quilting because I wanted to work free of grids and patterns... 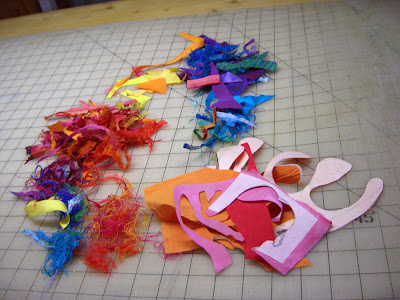 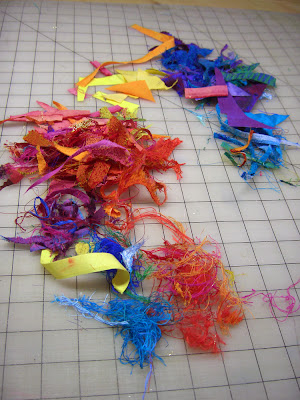 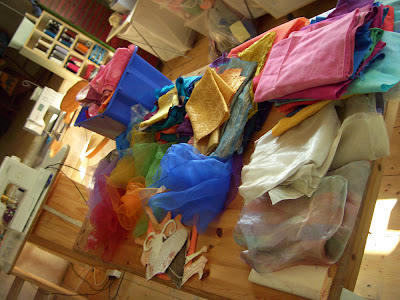 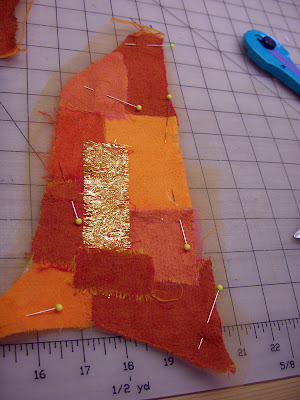 I couldn't resist to put this photos in the blog... Just to show the colors I am using, the silks and the golds...

I also put one of one of the different backgrounds I'm using.
Posted by Sara lechner at 3:21 PM 5 comments:

I used the embellisher and tried once more some new combinations of fabric and wool. 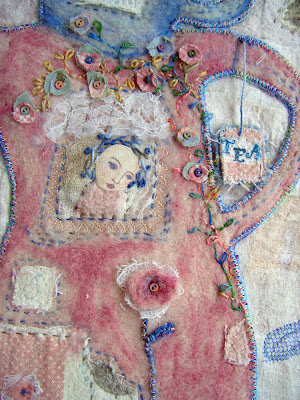 I wanted it to look like some kind of traditional patchwork, not "so" traditional... 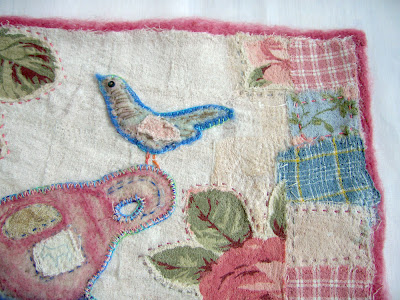 The dragonfly is looking at the scene... 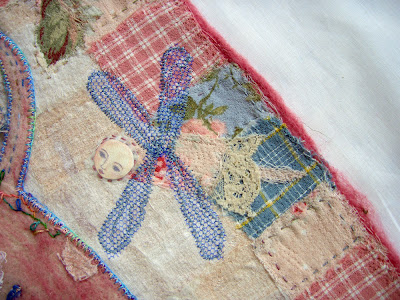 ...and this is the whole piece. The story behind this quiltlet is that I don't like to take
all weeds out of the gaps between the stones on the terraces or stairs, there are always nice flowers growing there that deserve to be admired... 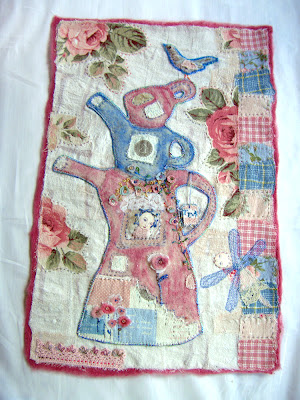 I am doing these pieces because I must give a workshop for ladies who have done quilting till now and want to see how to use the embellisher for their purposes.
Posted by Sara lechner at 7:15 PM 25 comments:

This lady is coming home with the morning star... who knows why... perhaps she comes back from her friend but she could also have worked all night. So different interpretations and I keep thinking about each of them. The sun is up, the birds sing, the morning star is still there.

I did the background with silk paint on polyfelt. I loved the result. The paint gathers on the borders and it dries nicely.

I used some beads I bought on my visit to Traunstein in Germany at the shop of one very interesting felt artist, Barbara Huber. The name of the shop is "Unikat" but I couldn't find a web address...

Gaby Tisch, a German textile artist, who makes the most beautiful dyed fabric and threads, was in my workshop and we tried to combine dyed fabric and embellisher. This piece is a result of this. 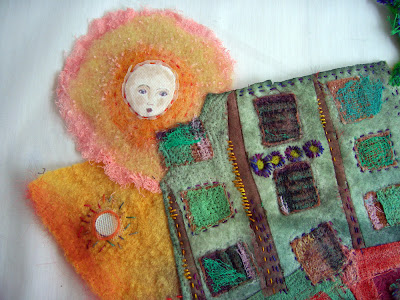 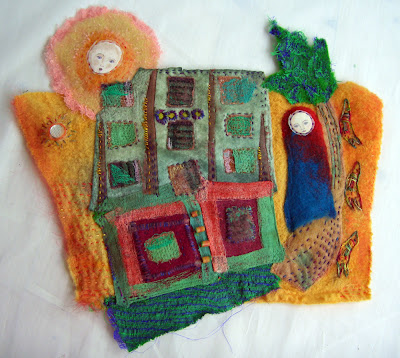 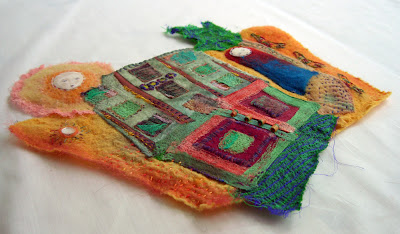 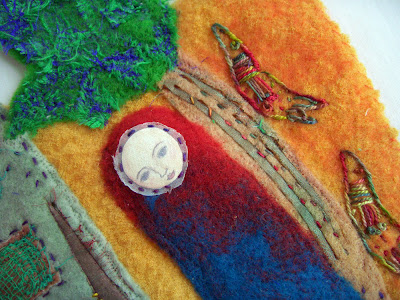 One more marvel from Jude

painted applique ready for stitching
Originally uploaded by onebyjude
Sometimes I find things in the web that make my heart sing. This is one of them. Done by Jude, the most inventive artist I know!
Posted by Sara lechner at 8:27 AM 2 comments: